Burrr....I'm wet, and definitely shivering today. My Mama had this bright idea of giving me a bath today coz "Oohh..it's a bright sunny summer day. Let's give Angelina a bath," she said. Not that I mind the aromatherapy cum hydrotherapy services that she gave at the SPA (the kitchen sink, actually) but it's freezing outside and it's very very windy. I'm even complaining about the massage she gave while lathering the aloe vera shampoo all over me but it will be ages before I get to lick my entire body dry.
You see, we cats has a reputation when it comes to cleanliness and hygienic practices. We like to groom ourselves at any time of the day, worse for my long-haired brethren, but we don't particularly like WATER! We belong to those expensive category of possessions that's labelled DRY CLEAN ONLY. Not that we need to be sent to the laundromat though...
I don't know about other cats but another of my pet peeves is nail clipping. I will claw, scratch and yowl my way out of such a situation. No manicure or pedicure for me...please!
The only area where Mama and I see eye to eye is the upkeep of my toilet. She's been very good at poo scooping, choosing the right litter material and knowing when to change it. You'll be amazed at the range of litter materials available nowadays but my Mama is an expert at choosing the right one for me. You want to know what we do if our toilets are dirty? We'll do the business elsewhere! Probably on the furniture. I know Mama had that problem with her other family. Heard that they vomit a lot too.
Oohh..my tail is still wet. Must lick it dry...lick it dry...lick it dry....meow!
Posted by Cat-from-Sydney at 3:54 PM No comments:

Boy..oh...boy! It's a racket down there. Apparently everyone in the neighbourhood is celebrating Christmas Eve with a party. Noisy parties! Been hearing that particularly sweet song that says...Silent Night, Holy Night....I wish I could change the lyrics to Rainy Night, Noisy Night...
Hey! Angelina needs her beauty sleep, I shouted. Oops...think I just made the neighbour's dogs howl coz my shouting sounds like a big growl to their ears.
Mama said we are lucky we don't live in Cabramatta, at least the people in this suburb don't play with fire crackers.
Think I'll just dive under the Mama's duvet. She's just switched on the electric blanket coz it's a very cold night. Best rain in Sydney, the weatherman said on TV. I don't mind the rain as long as I'm indoors but I hate it when its windy. There's something about the sound that reminds me of my past life.
You see, I was born in someone else's home. Then I was given away coz that household has too many kittens. Apparently they don't believe in desexing us cats!
The new owner was fine at first, there were 4 kids and 2 adults. Problem was, they thought I was like a teddy bear. I'm alive you see, and I have claws and fangs...And those kids like to pull my tail. To cut the story short, they left me all alone in the backyard. There were feral cats and dogs and funny noises when there were storms...
Guess I'm lucky coz Mama heard of me and she rescued me. Now...people call me the spoilt cat who live like a princess...Well, tough luck peeps! I rule this household. I know that Mama has another family overseas. As long as they remain there, I'm not complaining.
Posted by Cat-from-Sydney at 5:47 PM 2 comments:

My Mama is a Big Momma...well, not exactly as big as the Biggest Loser contestants but she's been having this yo-yo thing for years. Of course, as any decent Aussie would do, she blames the weather. Said that winter was too cold and she had to eat to keep warm. Interesting....now that we actually have two heaters at home. Spring and Summer? Too much rain, can't go out to exercise, she claimed. But Mama, haven't you heard of Fernwood or Soul Fitness?
But I love my Mama the way she is. Because I love cuddling up with her, she's so soft...like a teddy bear. My favourite is sleeping on her bosom when it's raining and cold outside. Her hugs make me feel secure and protected. Don't think it's the same if Mama suddenly become slim and svelte. Urgh..all bones and skin. I shudder at the thought.
Well, Mama dearest, as long as you're healthy, who cares about your size? What's important is your big heart. I love you just the way you are...mwah mwah...
Posted by Cat-from-Sydney at 9:32 AM No comments: 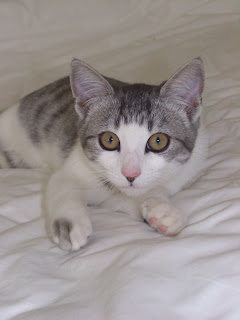 Posted by Cat-from-Sydney at 11:18 PM No comments:

Hie! My Mama calls me Angelina Jolie. No kidding, it's in my vet card. Love you all! Mwah Mwah....
Posted by Cat-from-Sydney at 11:11 PM No comments:

We cats are a boring lot, I tell you. What do I do all day long? Well, let me rephrase that...what does my human master (she call herself Mama) expects me to do when I'm alone at home?
Frankly, I don't know what other cats do but I have been spending my time intelligently. My day would start by licking Mama's face to wake her up at sunrise. Easy to do on weekdays but quite a chore on weekends coz she likes to "sleep in a bit" she said. Then I led to the kitchen where she will feed me, put fresh water in the bowl and clean my toilet. There were days when she forgets or too lazy to do the poo scooping though. That irks me and I'll show my displeasure in the most unpleasant way. I gave her a "present" in the kitchen sink! Hee hee hee...She's learned her lesson.
You should applaud Mama for her effort in keeping me happy. She has this book called Cat Owner's Manual and has been burying her nose in it. Must have puzzled when I act in the contrary, unlike what the author of that book wrote.
Oops...I've digressed. Back to my routine...I'll do the necessary sending Mama to the door as she leaves the house for work. Will not fail to give a pathetic "don't leave me alone" look, just to make sure she comes home in time for my evening meal.
After she's gone...jeng jeng jeng...it's nap time...aargh....what a bliss....I'll put my head on Mama's pillow and stretch myself on her bed. I need to conserve energy for the evening...that's when I'll make Mama play with me...just love those balls and fishing thingy....
Aahhh...what a life....
Posted by Cat-from-Sydney at 10:29 PM No comments: