Angelina's note: Mama is the new fashion icon in town. She came back from a trip to the east looking like a panda (reverse effect though)....then she launched a new perfume called PeeWee by Brad Pitt. Wanna know what it is? When she went to fetch Brad from the hospital, the brat welcomed her with a nice warm pee....on her!!!! har har har *evil laughs*
Posted by Cat-from-Sydney at 12:05 PM 30 comments:

It has been rather quiet at home with no Brad around.
Usually he and Sebastian would be having their very brofurly and very noisy wrestling while the rest of us would wish him well for giving it really good to that little peskyness.
Mama went to visit him everyday and so far has not brought him home.
Some good news yesterday.
The doctors say Brad was slightly more alert and has started eating on his own.
Hmm....maybe he just didn't like hospital food....
Anyway, as the doctor took him out of his confinement bed, Brad peed! In all pissing noisiness in front of Mama...it was on the hospital floor. Was he showing Mama that finally he can pee on his own..now that the tubes have all been taken off?
Then, as soon as the assistant put in refreshed litter box, Brad made another gift...not just pee he pooed. Gross as they may be, those are good signs that Brad is healing.
But he can't come home yet as there's still blood in his pee.
So, please....more healing purrs... I kinda miss my former slave...hmmm...maybe I should throw a bigggg party when he comes home. purrr....meow!
Posted by Cat-from-Sydney at 2:01 AM 21 comments: 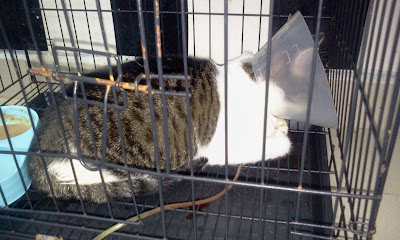 It has been an unhappy day at home.
Mama found Brad lying on the kitchen floor at about 11am today.
He was foaming in the mouth and did not protest when he was put in the carrier.
Mama drove as fast as she could to the animal hospital.
The vet checked his vital signs and found that his bladder was swollen.
An emergency procedure was done on Brad to relieve him of his blocked pee.
He had to be put under anaesthetic.
He has gained consciousness now.
But that's not the end of it.
Tests done on his blood reveal more illnesses.
There was blood and crystals in his pee.
We are praying against hope that he's not suffering from renal failure.
Brad is now recuperating at the hospital.
Mama is beyond devastated....
Posted by Cat-from-Sydney at 8:04 PM 24 comments:

Reminiscence on Thursday: Lest We Forget

It was a public holiday here yesterday. Besides helping Mama with housekeeping, we also spent a lazy afternoon watching whatever Brad is watching on TV. Then we saw a newsflash about a massive earthquake off the island of Sumatera at around 1638hrs Malaysian time. It sent Mama into a panic and she frantically tried to contact her colleagues in Acheh. She couldn't get anyone via phone or email. Then she started calling London to see if anyone from headquarters know what's going on. Our afternoon that started so easy peasy became hectic. It was only after 10.00pm that we got news about Mama's colleagues and by that time the tsunami alert was already withdrawn.

We sort of "interviewed" Mama about her experience in 2004, when the big one hit Asia, and reports say even all the way to Somalia. Mama said it was a disaster that she hoped she will never have to see again. The devastation was massive and in some areas, still unresolved. It wasn't just the loss of hundreds of thousands of life, it was also the untold damage to livelihood as homes were broken, businesses collapsed, schools inundated, boats beyond repair....Thus, the hardest part was to pick up your life and move on...

Lest we forget, here are some photographs that Mama and Dad took while visiting some of the places affected by that Boxing Day 2004 tsunami.

Angelina's note: We have more gory pictures (you know....body bags, blood, mutilated limbs etc) but decided not to shock all you kitties. There was one of a blind kitten in Acheh that Mama cried on everytime she sees that picture. After all these years, we thought Mama would have been hardened by the sufferings she keeps seeing but no... my Mama has a soft heart (purrrlease don't tell her I told you that). Kitties, spare a minute to remember all those that have gone before us, humans or companions alike. purrr....meow!
Posted by Cat-from-Sydney at 11:35 AM 29 comments:

Lost and Found (sort of)

When you thought you've lost something forever, somehow it comes back or resurfaces, sometimes.... errr... has Angelina turned into a philosopher now? Not quite.

You see, Mama and Dad went back to Dad's home town a couple of weeks ago. It was a day trip, for work, not pleasure. And so the cats stayed home with no babysitter either.

While there, Mama and Dad visited a friend and made a startling discovery. You see, many many years ago, there was an old palace by the name of Istana Kolam (istana = palace, kolam = pond) in Kuala Trengganu. It was said to be the birthplace of gamelan music in the state of Trengganu, it was the reign of Sultan Sulaiman Badrul Alam Shah then. Read all about the gamelan here.

Anyway, back to the old palace. It was demolished many many many moons ago to make way for some modern flats.  Uncle Awang Goneng mentioned it in his book Growing Up in Trengganu (read here). You can see an old picture of the palace here as well.

OK...back to Mama and Dad's visit. I'm really beating around the bush here, eh? Tucked behind some shops along Jalan Kelantan, is a house that is being built the traditional way. Traditional means no nails and using materials that are of norm in olden days' architecture.

What is most interesting, there are bits and pieces of Istana Kolam being used in the construction as well. Apparently, the owner of this house, that he's named Teratak Warisan (teratak = cottage, warisan = heritage), managed to acquire the materials at an auction. We didn't ask him which are the Istana Kolam materials but upon closer inspection, there's quite a lot of antique looking carvings, window panes, door leaves, and pillars. You be the judge.

Angelina's note: In our opinion, the house is about sixty percent ready. The original plan was to open it for tourists, to stay, like a boutique hotel of sorts. Asked if he's willing to sell, the owner's reply was: if the price is right. So, next time you find yourself in Kuala Trengganu, ride along Jalan Kelantan and look for signage that says IlhamCipta Advertising. This fine looking house is behind the shop. Oh, be sure to ask for permission before visiting. Trespassers will be shot clawed and scratched. purrr...meow!
Posted by Cat-from-Sydney at 2:51 PM 35 comments:

Labels: Kuala Trengganu, Teratak Warisan
Newer Posts Older Posts Home
Subscribe to: Posts (Atom)
“Man, when perfected, is the best of animals, but when separated from law and justice, he is the worst of all.”
Aristotle (ancient Greek philosopher, scientist and physician, 384 BC-322 BC)