I'm so upset with Ikea. Remember Nikki's endorsement of their product? They still haven't called. Not a tinkle.

Come on, do they want me to sing the entire ABBA repertoire in Swedish? OK, I'm giving them one more chance. Look, I manage to secure the biggest name in F1 racing to endorse their product. Don't believe me?  Look below.


Extracted from Uncle Wiki:
"Muntingia calabura, the sole species in the genus Muntingia, is a flowering plant native to southern Mexico, the Caribbean, Central America, and western South America south to Peru and Bolivia. Common names include (English) Jamaican cherry, Panama berry, Singapore cherry, Strawberry tree; (Spanish) bolaina, yamanaza, cacaniqua, capulín blanco, nigua, niguito, memizo or memiso; (Indonesia) kersen; and (Filipino) aratilis, aratiles, manzanitas and sarisa.
It is a small tree 7-12 meters tall with tiered and slightly drooping branches. It has serrated leaves 2.5-15 cm long and 1-6.5 cm wide. The flowers are small ,white and slightly malodorous. It gives rise to 1-1.5 cm light red fruit. The fruit is edible, sweet and juicy, and contains a large number of tiny (0.5 mm) yellow seeds.
It is a pioneer species that thrives in poor soil, able to tolerate acidic and alkaline conditions and drought. Its seeds are dispersed by birds and fruit bats. It is cultivated for its edible fruit, and has become naturalised in some other parts of the tropics, including southeastern Asia. As a pioneer plant, it could help condition the soil and make it habitable to other plants. However, it might also be considered as an invasive species since it might out-compete indigenous plants."

Angelina's note: Mama said she used to have one of these trees in the backyard of her childhood home. The birdies will come in droves to feast on the ripe fruits. But there were no birdies when I visited this particular tree. That explains the large amount wasted on the ground. purrr....meow!
Posted by Cat-from-Sydney at 12:40 AM 40 comments: 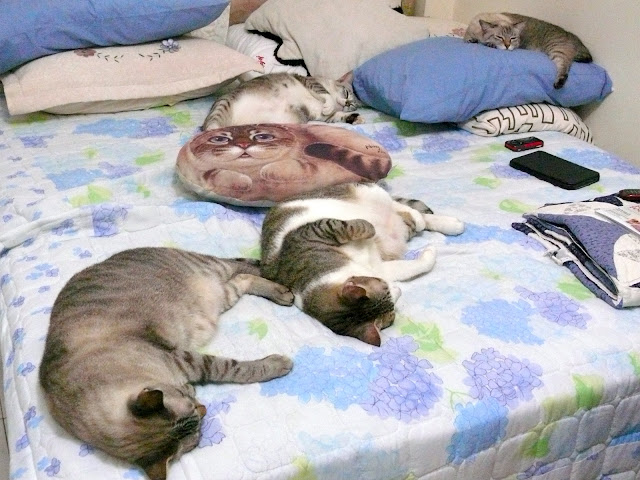 Best Waiter in the World

After the breakfast meeting at that mansion in the orchard (previous entry), Mama and Dad rushed back to KL as they had made an appointment to visit a school for refugee kids. As it was around lunch time when we reached the area, we decided to have lunch at a stall nearby. Since we didn't know which stall is good, we decided to choose based on their HR policy. The stall with the most handsome waiter wins our business. And we'll be back again, especially when it's the waiter's shift. Won't you patronise the stall looking at this handsome face? 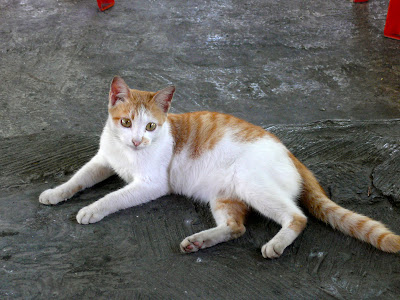 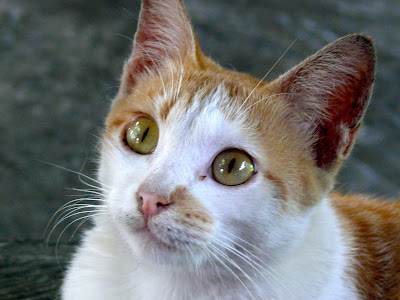 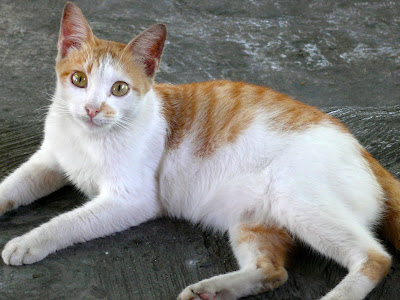 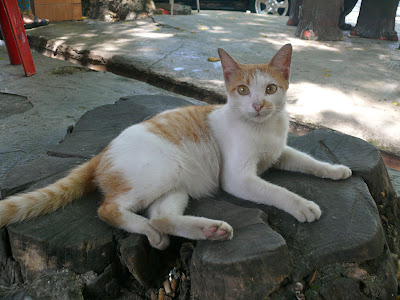 Angelina's note: OK, so the pawpawrazzi went overboard with the flashy box. But, who wouldn't? His tip? Grilled catfish and manta ray cutlet. purrr...meow!
Posted by Cat-from-Sydney at 3:37 PM 30 comments:

Mama and Dad had a breakfast meeting with a VVIP in a state down south last Friday. Very early breakfast meeting as we left home before 5am. So, while they had their tete-a-tete session inside, I took the opportunity to explore the grounds...mindful of the watchful eyes of the security.

Angelina's note: I won't mind living in an orchard. But in a much much smaller house. Imagine the number of servants we have to employ just to clean the toilets. purrr...meow!
Posted by Cat-from-Sydney at 12:28 AM 46 comments: 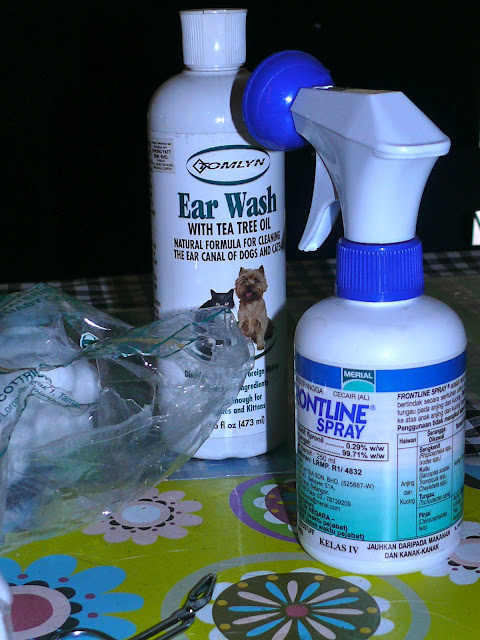 Angelina's note: I heard Mama telling Dad, "maybe I should go back to school and study veterinary science." Oh boy! All six of us were subjected to some torturous moments at home today. No flea farming in my house, Mama said. purrr....meow!
Posted by Cat-from-Sydney at 4:29 PM 18 comments:

It's almost the end of the Shawal and yet we still get Eid Open House invitations. In fact, we could only attend a few in a day as sometimes we get so many invitations, too much for our stomachs to handle too. Anyway, to cut the story short, we attended two Open Houses today...technically, one Open School and one Open House.

In the morning, we went to Cyberjaya, a new city about an hour's drive from home. It was to Mama's old school. The school was having a 3-in-1 event - Eid party, birthday party for some current students, and a prayer session for those taking their exams in a couple of weeks' time. These are Year 3 students who will sit for their Lower Secondary Assessment (Penilaian Menengah Rendah in Malay) in early October. Good luck, girls!

We were happy to meet old friends as well as making new ones. The school had reserved a table for alumni members and even assigned some girls to be at our beck and call. OK...maybe we use the wrong term there....but we can't call them waitresses for day, right? Anyway, we enjoyed the food and the company. My only complain, we didn't get to taste the BBQ lamb. But at least we had chicken satay (again????) Aunty Ona came with us as Mama needed someone to bully in the car as Dad had to work.

We left Cyberjaya in the afternoon and head off to Taman Bukit Teratai (Lotus Hill Garden???), Cheras, to fulfill Ayoh Wang's (he blogs here) Open House invitation. Took us about an hour as we had to negotiate some winding roads in an unfamiliar area. It was almost "closing" time by the time we reached his house. The aroma of ghee rice, chicken and lamb dishes greeted us. Phew! Thank God we didn't eat too much at the earlier party. And while we were eating, Aunty Puteri (she blogs too, here) and Uncle Mizi arrived. So we had a fun time chit chatting (as most bloggers tend to do), oblivious to the surrounding. Ayoh Wang said he was expecting Aunty Ninot (she blogs here) and family too but they must have lost their way as by the time we left, they still haven't arrived. We'll catch her some other time then.

Angelina's note: Burp! Excuse me....am too full. Mama said we should all go on diet tomorrow. purrr...meow!
Posted by Cat-from-Sydney at 10:17 PM 34 comments: 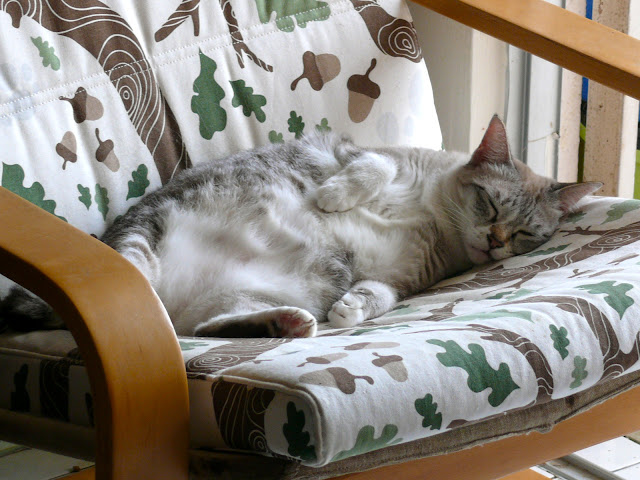 Angelina's note: Ikea's management purrrlease take note. Y'all should make my niece Nikki your mascot. I'm her manager, talk to me. purrr....meow!
Posted by Cat-from-Sydney at 11:48 AM 38 comments:

I was helping Mama spring cleaning (it is spring in Australia!) our lappy hard disk, transferring files and folders onto the external disk, etc etc...when I came across a set of photos we took at an event last month. What's so special about the photos or the event, you might ask?

It is special because it involved my future mother-in-law, Aunty Deeb. You see, her meowson, Rajoo is my fiance #1. In fact, Aunty Deeb organised the event to raise funds for a shelter for single mothers, orphans and poor children. Am I lucky to have two mommies who just love charity work? Aunty Deeb had some of her celebrity friends to sing (for free) at the event as entertainment for the evening, besides herself. The children from the shelter also entertained us with songs and dances. The food was fabulous too. Oooh, Aunty Deeb blogs too (When the Fat Lady Sings - on my blogroll). Or, used to, as she hasn't updated for quite sometime. Must be very busy with work.

Labels: Adibah Noor, Fast2Feed 2011, iftar
Newer Posts Older Posts Home
Subscribe to: Posts (Atom)
“Man, when perfected, is the best of animals, but when separated from law and justice, he is the worst of all.”
Aristotle (ancient Greek philosopher, scientist and physician, 384 BC-322 BC)