My Mama is very upset! The NSW government has decided that ANZAC Day is no longer a public holiday. This year, 25th April falls on Saturday, therefore Monday should be declared a holiday. But not this year. There goes the long weekend, she said. Brad and I love having Mama at home. We'll spend the day cuddling on the sofa, especially when it rains. Now, back to the history lesson.

Briefly:
Anzac Day is a national public holiday in Australia and New Zealand, and is commemorated by both countries on 25 April every year to honour members of the Australian and New Zealand Army Corps (ANZAC) who fought at Gallipoli in Turkey during World War I. Anzac Day is also observed in the Cook Islands, Niue, Samoa and Tonga.

The Gallipoli campaign:
When war broke out in 1914, Australia had been a Federal Commonwealth for only 13 years. In 1915, Anzacs formed part of an Allied expedition that set out to capture the Gallipoli Peninsula, under a plan by Winston Churchill to open the way to the Black Sea for the Allied navies. The objective was to capture Istanbul, capital of the Ottoman Empire and an ally of Germany. The ANZAC force landed at Gallipoli on 25 April, meeting fierce resistance from the Turkish Army commanded by Mustafa Kemal Atatürk . What had been planned as a bold strike to knock Turkey out of the war quickly became a stale-mate, and the campaign dragged on for eight months. At the end of 1915, the Allied forces were evacuated after both sides had suffered heavy casualties and endured great hardships. Over 8,000 Australian and 2,700 New Zealand soldiers died. News of the landing at Gallipoli made a profound impact on Australians and New Zealanders at home and 25 April quickly became the day on which they remembered the sacrifice of those who had died in war.
Though the Gallipoli campaign failed in its military objectives of capturing Istanbul and knocking Turkey out of the war, the Australian and New Zealand troops' actions during the campaign bequeathed an intangible but powerful legacy. The creation of what became known as an "Anzac legend" became an important part of the national identity in both countries. This shaped the ways their citizens viewed both their past and their future.

Here's an interesting bit that has come out of everything Anzac. The ANZAC Biscuits!

There are a few theories on the origins of ANZAC biscuits (or ANZAC Cookies for Americans) but it is certain that they came about during the First World War, around 1914/15.

Some say that they started as biscuits made by the troops in the trenches with provisions they had at hand to relieve the boredom of their battle rations. And some say they came about due to resourceful of the women on the "home front" in an endeavour to make a treat for their loved ones that would survive the long journey by post to the war front.
There is even the suggestion that they originated from Scottish Oatmeal Cakes which is entirely possible. Whatever the origin, they have won the hearts of all Aussies the globe over as the pseudo National Biscuit.
And here is how to make them, it is dead simple. If I can make them, anyone can!
Ingredients
• 1 cup plain flour
• 1 cup rolled oats (regular oatmeal) uncooked
• 1 cup desiccated coconut
• 1 cup brown sugar
• 1/2 cup butter
• 2 tbsp golden syrup (or honey)
• 1 tsp bicarbonate of soda
• 2 tbsp boiling water
Method
• Combine the flour (sifted), oats, coconut and sugar in a bowl.
• Melt the butter and Golden Syrup (or honey) in a saucepan over a low heat..
• Mix the bicarbonate of soda with the water and add to the butter and Golden Syrup.
• Pour the liquids into the dry ingredients and mix well.
• Spoon dollops of mixture, about the size of a walnut shell, onto a greased tin leaving as much space again between dollops to allow for spreading.
• Bake in a moderate oven, 180oC/350oF, for 15-20 minutes.
• Cool on a wire rack and seal in airtight containers.

For a little variety you may wish to add 2 teaspoons of ginger spice or even Wattle Seeds, a recent addition but don't ask me where to get them.

One of Mama's friends is very passionate about turtles, of the sea, land or riverine variety. She gets upset if she sees people selling, buying or eating turtle eggs. I haven't eaten let alone seen any turtle eggs. But I support any effort to conserve fellow animals, especially the endangered ones. To quote Aunty Ayu's recent spiel:
"No one here sells turtle eggs right? And no one here eat turtle eggs right? OK, some may have done so in the past, and have since stopped right? Right.
WWF-Malaysia is currently running an Egg=Life campaign, getting pledges from the public to:
1. support laws to ban the sale and consumption of turtle eggs (currently the laws still allow turtle eggs to be sold freely - except leatherback eggs)
2. support the call for a comprehensive and holistic federal legislation to protect turtles (currently each state has its own turtle enactment, with different state having different provisions, and some states don't have it at all)
3. not eat turtle eggs (I know everyone here doesn't, so no problem with the pledging right?)
So can I get everyone's support here please?
Just click on www.wwf.org.my and sign your pledges please?
On behalf of the endangered marine reptiles, THANKS SO MUCH!"
You can also show your support by "clicking" on the cute banner on the right.
Posted by Cat-from-Sydney at 1:11 PM No comments:

My Mama went to the North Coast of NSW a while back. This area covers places like Coffs Harbour, Ballina and Byron Bay. She didn't actually went there on purpose, rather she was passing by the area on her way to Brisbane. It's a good 12-hour drive to Brizzie from Sydney, thus the need for stops and rests along the way.
If I remember correctly, that was her first and only time that she drove to Brisbane. She's stuck to aeroplanes since then. My ageing body can't take it anymore, she said.
The first stop was Coffs Harbour. The seaside town is practically halfway between Sydney and Brisbane (550km from Sydney, 427km from Brisbane). The main attraction is the BIG BANANA, one of the first BIG THINGs in Australia. It was built in 1964 (older than Mama!!) and measures a staggering 11m long, 5m high and 2.4m wide. That's millions and millions times larger than actual cavendish variety that it represents. Mama bought a book listing all (almost) of Australia's BIG THINGs at the souvenir shop there. Apparently the BIG BANANA was built by an American who came to Australia to study insects in the 1960s. Fancy that! 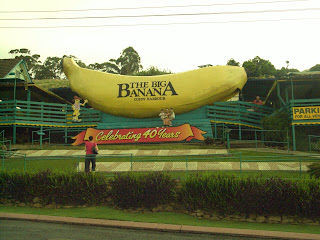 The BIG BANANA of Coffs Harbour 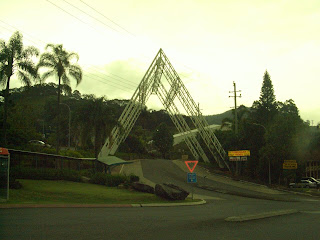 Another view of the BIG BANANA complex 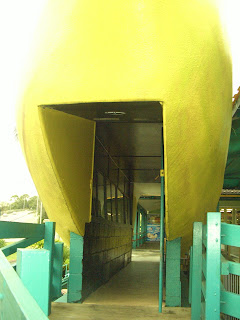 The only banana in Australia (if not the world) where you can actually walk in it! 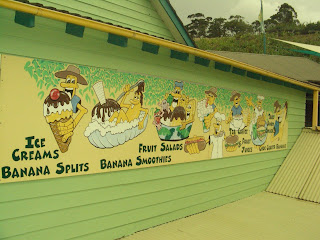 Biggest banana menu in the world? 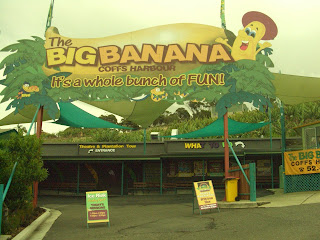 About 210km north of Coffs Harbour lies the seafood paradise of Ballina. Mama says there's a large fibreglass prawn that sits on top of the roof of a restaurant. Of course, the restaurant sells seafood (including prawns) and chippies. Unfortunately they don't make dishes like chili crab or black pepper prawns. My Mama likes her seafood hot and spicy. 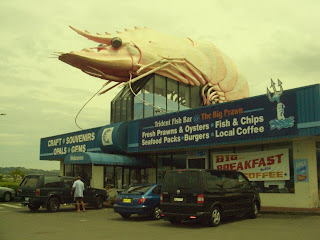 Further up, after Ballina, is Byron Bay. Mama said there's a place that's a must visit for everyone passing by this area. It's called the Macadamia Castle. She showed me a picture of Uncle MM eating a humongous plate of pancakes served with ice cream and macadamia nuts at the Castle Cafe. Mama says she loves the Nut Bar where you can get a myriad of macadamia products. Including the nuts in at least 12 flavours! Oh, did I mention that there's a BIG KNIGHT standing guard in front of the castle? He's humongous too... There's a host of information about the castle and the famous nuts at their official website www.macadamiacastle.com.au. 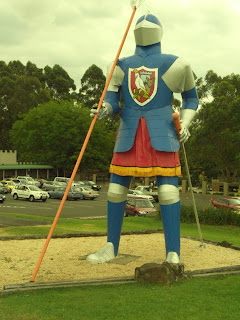 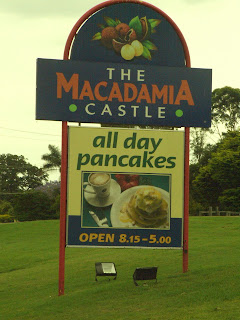 The signboard for the Macadamia Castle 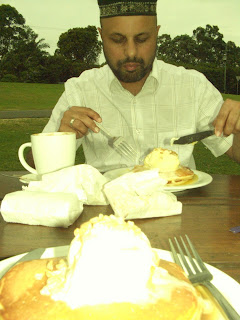 I know my Mama is dreaming of re-visiting those places...maybe with Brad and I?
Posted by Cat-from-Sydney at 10:17 AM No comments:

Would you believe it? Brad did something totally out of character today. I was dozing in my Mama's laundry basket when, lo and behold, he snuggled up next to me...he actually snuggled up! Fortunately I wasn't in a lovey dovey mood so I totally ignored him. Mama said it must be the cold autumn day we had today. Don't believe me? Look at this picture. 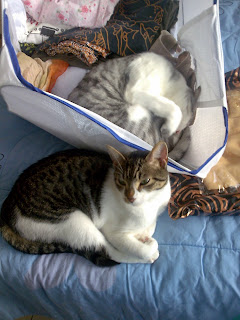 My Mama also said somehow Brad's appearance has improved as he grows older (not wiser though...). You be the judge. 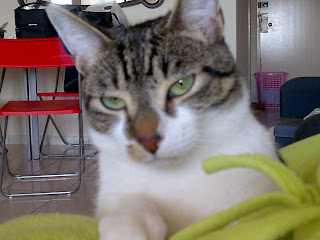 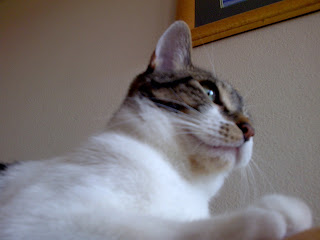 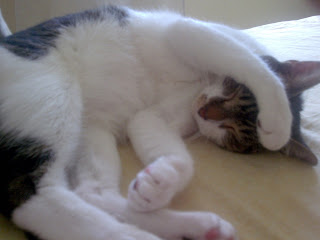 Labels: brad out of character

The Case Against Brad the BRAT 1

He's been a great companion (for the exercise) but I can't say that he's been a GOOD companion. He's a big BULLY despite his small size!!! And he's getting away with murder because of his small size!!! What has he done recently? He's hurt me bad. My nose will never be the same. There's a red line "decorating" my nose, my cute button of a nose! Look at me! Can you see that red slash on my nose? 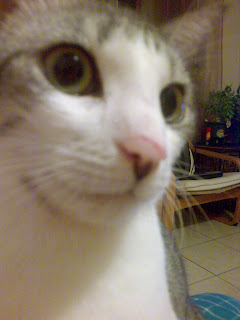 Posted by Cat-from-Sydney at 8:54 AM No comments:

Labels: hurt nose
Newer Posts Older Posts Home
Subscribe to: Posts (Atom)
“Man, when perfected, is the best of animals, but when separated from law and justice, he is the worst of all.”
Aristotle (ancient Greek philosopher, scientist and physician, 384 BC-322 BC)