That is the birthdate of three cute and fluffy kittens who unfortunately resemble only the Queen (my biomom Nicole Kidman who has Siamese blood - blue eyes, cream fur) and none of the King (my biodad Tom Cruise - tabby, green eyes). We were named, according to time of exit from the womb, Michael Schumacher (me!), Ralf Schumacher (late and lamented) and Nikki Lauda. OK, so Mama and Dad are F1 junkies.

My brother Ralf died when we were about a year old. We shall not talk about that incident. Ever. The subject never fail to bring tears to Mama's eyes.

Anyway, as the years go by, Nikki and I have become really close. In fact, we are now conjoint twins. Don't believe me? Look at this pix. roar! roar! roar! 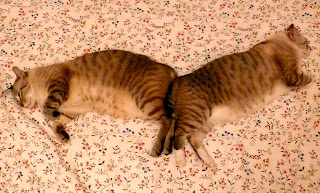 And we don't want to be separated. No need to start fundraising to pay them surgeons.
Posted by Cat-from-Sydney at 1:12 PM 21 comments:

Tom: Michael, Mama said maybe we should let the girls take over the blog from now on.
Michael: But why???
Tom: Coz we're so lazy and don't update it.
Michael: But we've been bloghopping a lot, so no time to update. You know...there's so much that a cat can do.
Tom: She said no excuses.
Michael: Then, we'll just update from now on. What do you think?
Tom: Hmm...maybe we can split the responsibility too.
Michael: Good thinking, Watson.
Tom: So, after you, Holmes.
Michael: What? Me first?
Tom: Yes, you first.
Michael: But you're older. You go first.
Tom: I'm also your father so do as I say.
Michael: I'm going to tell Mama.
Tom: Yeah...go ahead. Then she'll definitely give it to the girls.
Michael: Imagine Nikki writing about her mani/pedi and all sorts of girlie stuff.
Tom: So, do we have an agreement?
Michael: OK, next installment is mine. I can write about anything, right?
Tom: Yes, boys stuff.
Michael: Woohoo!
Posted by Cat-from-Sydney at 11:36 AM 34 comments:

I'm sad. Mama's gone away. Leaving Angelina and I at the mercy of Pingu and Ginger. Uncle Is and family will babysit us.

But don't fret. The blog's not gonna be neglected. I'm handing it over to Tom and Michael. The other boys in our family.

Tom, Nicole, Michael and Nikki must be thrilled that Mama's with them now. Considering that I have more days in a year with Mama, I'm not jealous of them. Maybe Mama needs to be away from me too. har har har *evil laughs* 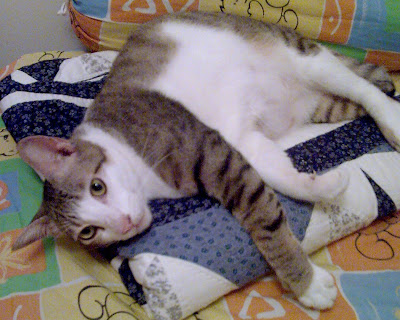 This is Tom! In case youze forgot how he looks like. 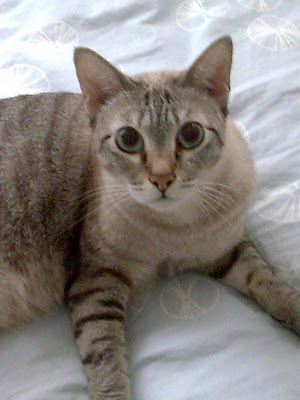 The Perils of Sleep Walking 2

I want to make a complaint.
That hibernating "princess" has been sleep walking again.
Seriously, Angelina!
I just knew that it will get her into trouble. 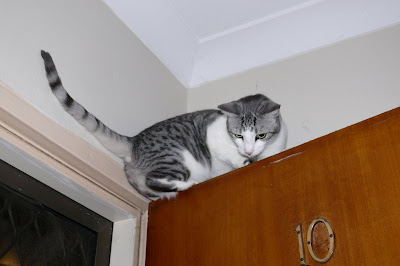 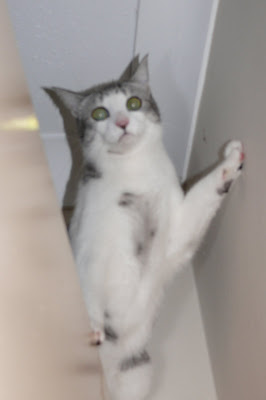 Look at her eyes. Looks kinda possessed, don't you think?
Just the other night, she woke up abruptly, climbed the screen/grill at the main door and get stuck up there.
Luckily, before I could call 000, Mama took the ladder and rescued her.
Was she having a nightmare?
She should...because I've taken over her domain.
I'm the alpha feline now. har har har *evil laughs*
Posted by Cat-from-Sydney at 5:45 AM 31 comments: 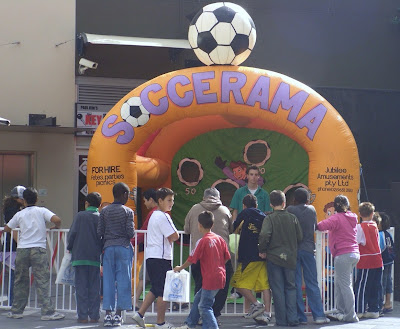 Soccerama? Soccermania? Whatever...
Yeehah!!! World Cup is over and done with. So, no more watching the idiot box at un-Godly hours. Yeah, there's still Tour de France live telecast but we're not into cycling. Yet. 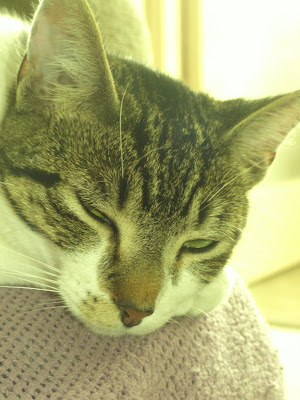 Anyway, time for me to catch up on my sleep....yawn....
My Mama has other ideas though. I'm really really glad coz I've been begging to spend time outdoors though it's like 5-7deg Celcius out there. Angelina can stay home as she's still hibernating. Yeah, it's amazing how much a girlcat can sleep. Does she think that she's Sleeping Beauty?

Oh, but I digress. Anyway, Mama plans to take me to the city. Just us. Mother and son outing. Oooohhhh....am so excited. 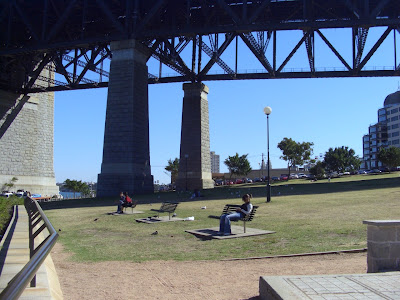 First, we'll just have a picnic under the Harbour Bridge. Aaah...time to frolick on the green green grass.... 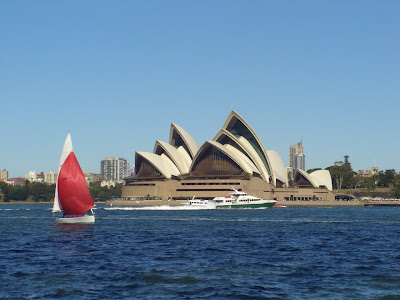 Then, we'll just sit quietly while admiring that great architecture of the Opera House. 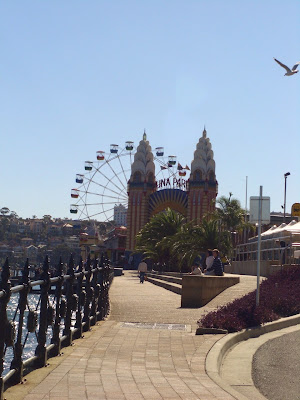 Next, a bit of adrenaline rushing adventure at the Luna Park. 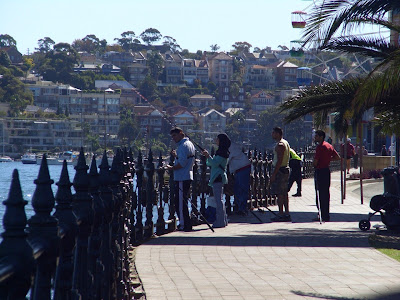 Followed by some fishing at the harbour. Y'all know how I love fish... 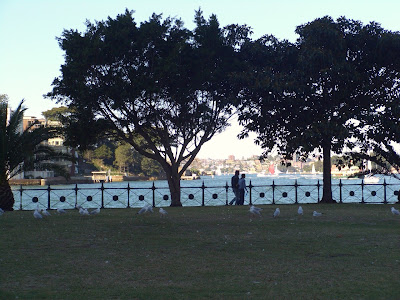 If I can't catch any fish, I'll catch myself some birds then. 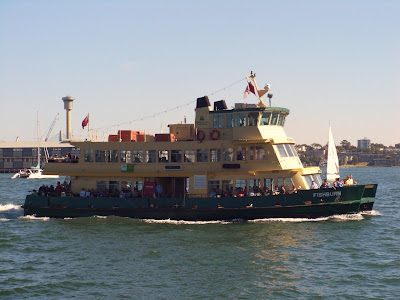 ...or catch the ferry to go to the Sydney Fish Market... 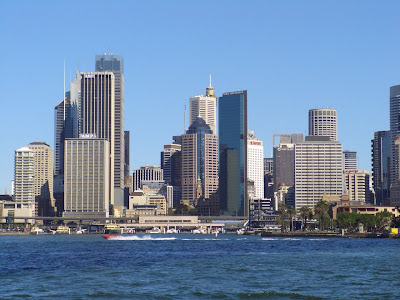 Mama would have to get some money from the bank first, somewhere in the business district, before we hit the market.

I was born sometime in the year 2007. I don't remember my biological mother much. Just that I somehow ended up cold and wet and crying at someone's kitchen door. That was Aunty J's kitchen. Aunty J and her family took pity on me and welcomed me into their life. I stayed with them for about three months before I was surrendered to my Mama. The rest, as they say, is history.

To commemorate that fateful day in July 2007 when my Mama first "gotcha" me, we had a small celebration at home. At first Mama wanted to invite the usual gang to a party but as she had a flu, decided against it. The celebration started from morning until midnight. Serious! They came in small doses but I savour every moment. 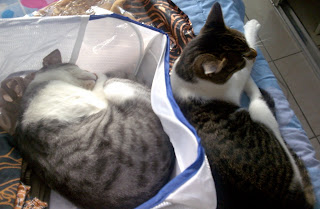 There I was relaxing next to the hibernating queen, waiting for Mama to prepare breakfast. 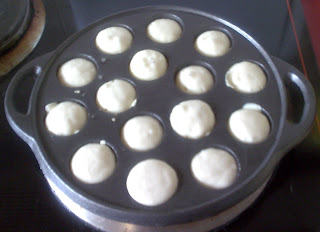 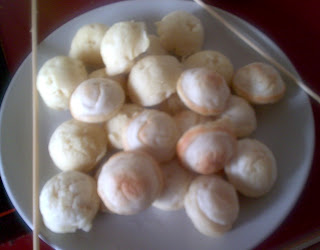 Aah...poffertjes. Yummm....those tiny morsels of delight also known as Dutch pancakes. We had those with honey.
Mama said she made the poffertjes to also celebrate the Dutch team's achievement in the World Cup. I'm not complaining. Oh, there's no recipe for this coz we got the pancake mix from the big guy at Parklea Market. Just add water, the instruction on the packet says.

We then spent the day gardening, mostly weeding as the rain has encouraged growth of some weeds in the pots. Some of the plants are also infected by pests and we had to spray white oil on them.

Come midday, Mama went to the kitchen again and made some fried noodles. She was really spoiling me rotten. The noodle dish has loads of prawns and veggies in it. Yumm.... 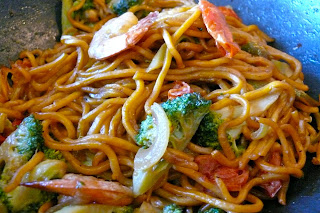 Want some? No, you can't. It's all mine.
And just when I thought it wouldn't get any better, Mama made chocolate chip cookies laden with heaps of macadamia nuts for afternoon tea. I had the cookies with Milo. I think the whole block could smell the aroma of the cookies. 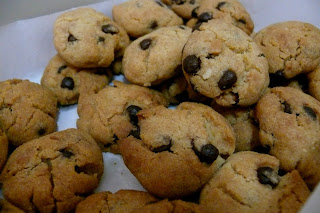 Some people say Mama's choc chip cookies are better than that "famous" brand. I agree.
My stomach was so full with all those pancakes, noodles and cookies that I had to decline Mama's offer of dinner. "But tell me if you're hungry again, OK?," she said. 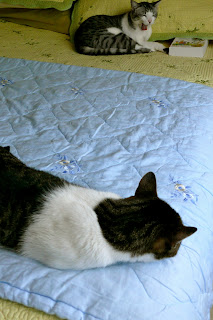 Even Angelina woke up from her slumber to help me celebrate. I couldn't be eating all those delish stuffs alone now, could I?
Later in the evening, my stomach was growling and I was begging for a light supper. So I have a bottomless pit of a stomach, OK? Mama has been so cooperative all day that I was at first hesitant to beg. But as it was my special day, she still went to the kitchen and cook up something. Hmmm....what else I wonder....

I could hear some stir frying, chili in the pan (everyone sneezed), then some mashing and bashing and more frying....to produce these: 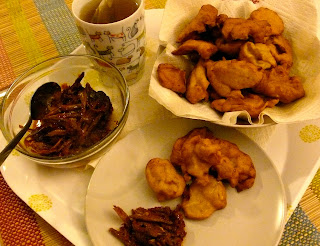