Wordless Wednesday: It's A Leap Year 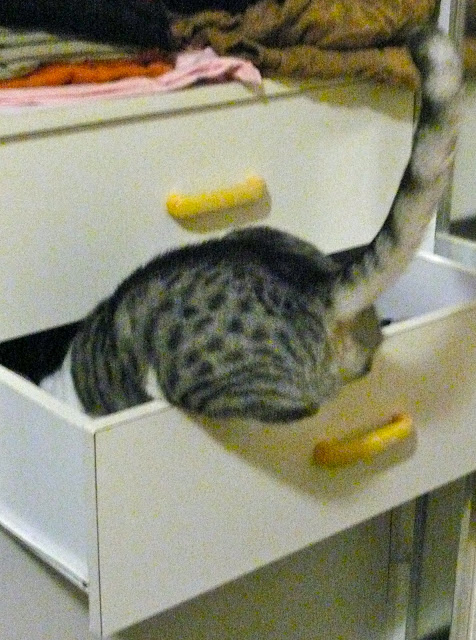 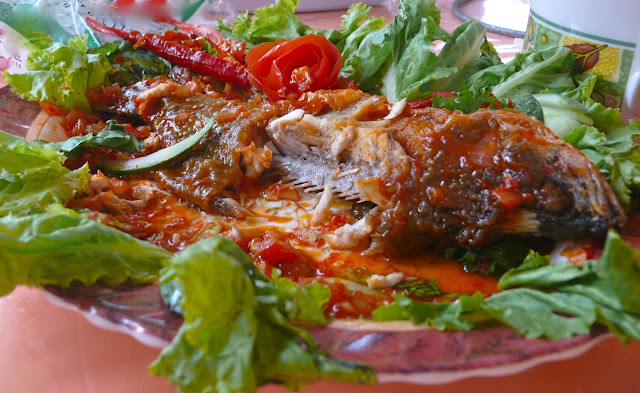 Angelina's note: Never underestimate the power of those little fists. Guess the pawpawrazzi didn't see that coming. purrr...meow!
Posted by Cat-from-Sydney at 3:55 AM 23 comments:

Tuesday with Mama: Does She Still Have It???

Hallo Kitties! My Mama has agreed to pen her thoughts on the trips she had recently. I won't be able to write this on her behalf since I didn't tag along. Thus, this version will be what we call "in her own voice". You be the judge on who's the better writer. Mama or me. purrr....meow!
The Amazing Race - KL to Mabul

You can't blame me for being excited about this trip to Sabah. The last time I visited the Land Below the Wind was in 2004, months before I moved to Sydney, and that was just to the capital, Kota Kinabalu. To say that I was excited would be an understatement. In fact, I was super duper excited that I didn't sleep a wink the night before. But of course, the time was spent cuddling my beloved felines, conferencing with them that they would have to put up with their Uncle Amir who will kittysit them while the parents are away. Anyway....I digress....

I was awoke at 4am on the morning of the flight. Some last minute packing, prepared early morning breakfast for kitties and hoomans alike, checking and making sure all appliances except the fridge were switched off, etc etc. Left home at 5.30am for a rendezvous with Amir at the office. Poor man had to babysit not just the kitties but the cars as well....As we were flying on MAS, we checked in at KLCAT, took the KLIA Express and had plenty of time to kill at KLIA.

The almost three-hour flight to Tawau was uneventful....or was it because I was asleep all the time?

Anyway, upon arrival in Tawau, we immediately surveyed the availability of public transportation that can help us get to Semporna for our rendezvous with the boat man who will take us to Mabul. (Hmmm....and why do citizens of the same country still have to go through immigration???)

My research shows there is a bus service from the airport to Tawau, a cheaper option than a taxi ride. Then we plan to take the express bus service to Semporna...easy peasy... on paper, at least. The reality was, we arrived at 11.30am, the bus had left at 10.30am while the next one will be at 1.30pm. Fortunately, we met a couple who was willing to share the RM45 per trip taxi fare to Tawau. Half an hour later, we arrived at Sabindo Square, the main terminal for express buses and taxies. We surveyed the express bus services and found several for Semporna. But they will only leave at 1.30pm. So we had some time to kill in Tawau. Fortunately, there are many restaurants in the area and a large mosque for prayers.

The journey by bus was interesting, mainly because we get to listen to native music....what I mean is we get to listen to songs sung by Sabahans in their native tongue. Interesting melody using native instruments as well. So now I know more than just Jambatan Tamparuli.... There was a minor accident involving a truck and a Kancil that held up traffic for a bit so we arrived late in Semporna. A quick call to the boat man and what a relief that he was still waiting for us. From the bus terminal in Semporna, we had to take a taxi to the makeshift jetty in front of the Seafest Hotel.

The sky was treacherously dark by the time we boarded the boat. We left Semporna at around 3.30pm, supposedly to reach Mabul in 45 minutes.

Lo and behold! The boat was caught in a storm at sea. It was raining so heavily that we were soaked although there's a roof over our heads. The water came in from the sides and any tiny openings on the sides. At one point, the boatman simply stopped the boat and said we couldn't move ahead as he couldn't see a thing. If only he had a compass, he added.

Duh? I looked at the teenie weenie compass attached to my backpack and then thought better. What if I try the GPS in the android? It worked!!!! Everyone gave sighs of relief when the boatman confidently restarted the boat engine and move ahead with the help of Google Map! And we safely reached the island, albeit soaked to the undies, at 5pm.


As they say, it's not the destination that counts, rather, the journey. Oh yeah...tell me that after 13 hours of car-ing, train-ing, flying, bus-ing, taxi-ing and boat-ing!!!

(Not so) Wordless Wednesday: Tail of Disapproval 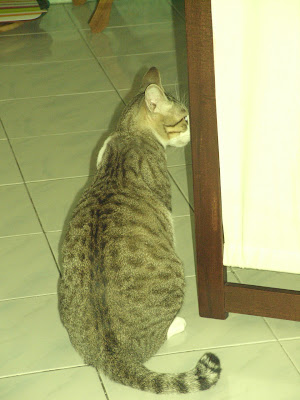 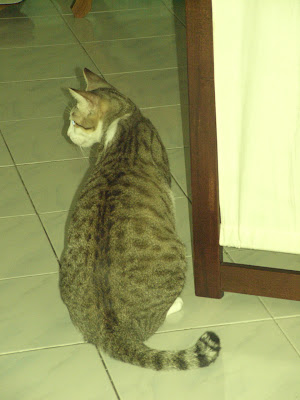 Angelina's note: Tom is demonstrating how disappointed we all are with our female servant. Come on! More blogging time, purrrlease....!!!! purrr....meow!
Posted by Cat-from-Sydney at 1:50 AM 54 comments: 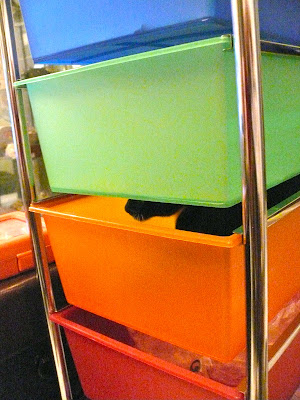 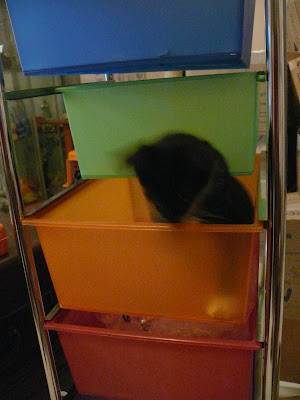 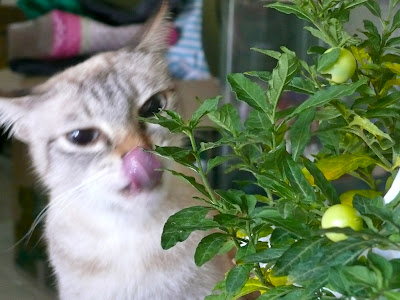 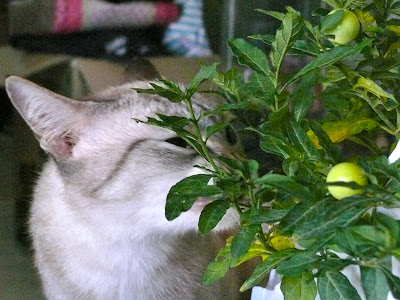 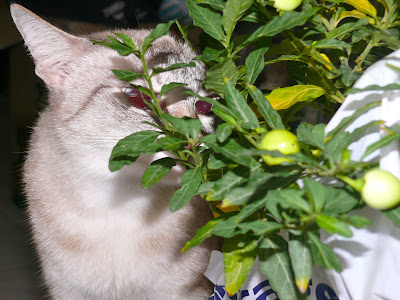 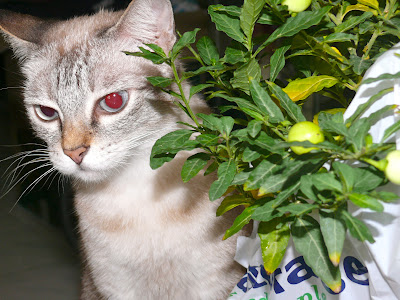 Richest Ex-Stray on the Block 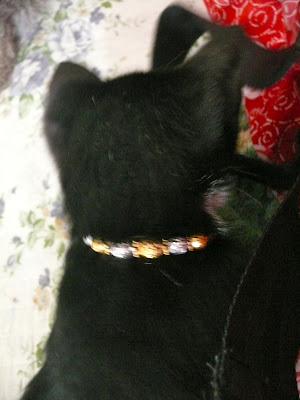 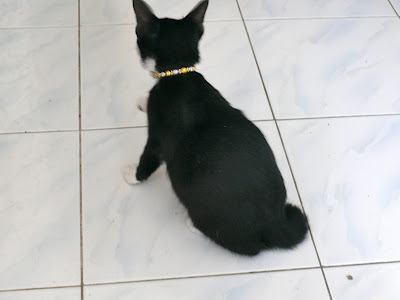 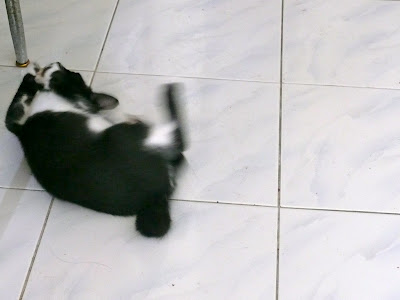 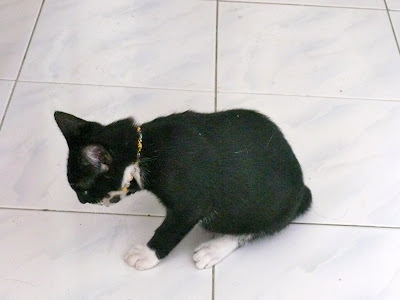 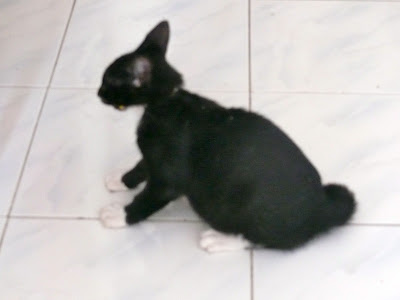 Angelina's note: Mama thought that pesky Seb should start living the high class life...and so put on a bracelet on him. Hmm.....won't a normal pet collar do? Never mind...but Seb is a boy. Boys don't dig this bling bling thingy. End result: Seb's chomping has damaged the bracelet's clasp. Now Mama would have to dig into her purse to get it repaired. Should I pity her? Nah.... purrr...meow!
Posted by Cat-from-Sydney at 3:03 PM 40 comments:

Wordless Wednesday: Up High with Nikki 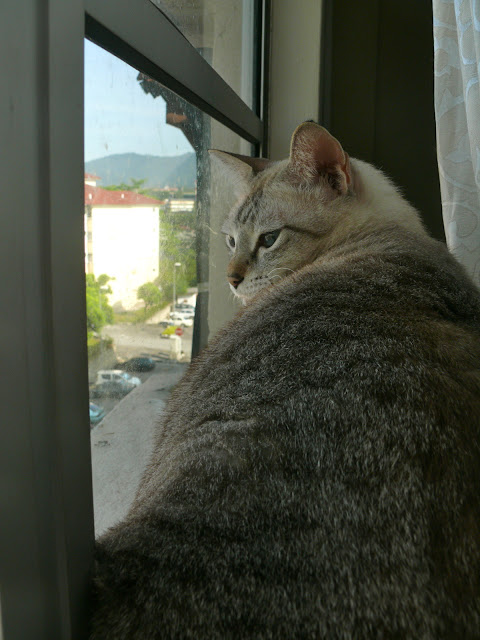