Sometimes, ignorance is not bliss.

Case in point: I have just found out that my darling gentle handsome Abang Epi has a black belt in the Korean martial arts Taekwando. On top of that, he is also a state (Selangor) representative and won a bronze medal in a recent national championship.

Y'all know that I've tried peddling him to young girls since Adam... a combination of brain and beauty... and now apparently he has brawn as well. So, there you have it. The complete package. My 3-in-1 Abang Epi.

Rest assured girls, if you hook up with him, you'll be protected....

pee ess: Abang Epi is a certified physiotherapist...so I wonder if he'd heal his opponent after he beat them up?
Posted by Cat-from-Sydney at 11:32 AM 34 comments: 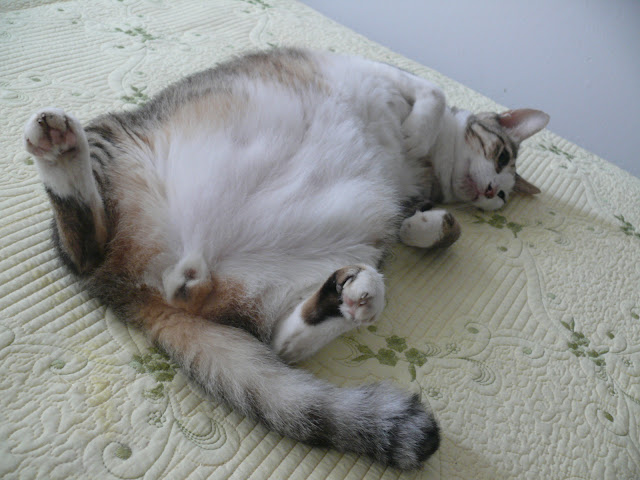 Angelina's note: The boy is learning that there is no such thing as privacy when we have hard core pawpawrazzi at home. purrrr....meow!
Posted by Cat-from-Sydney at 11:30 PM 28 comments:

Fit for A Feline

It's the professor here.

Today, I'm going to give some housekeping tips, namely, how to choose the most suitable wardrobe for your bedroom.

It is actually very easy.

What you'll need is a set of wardrobe (properly installed, of course) a cat or a couple of cats...the more the better. Let me illustrate my points.
If your wardrobe passes all those tests, you'll have a very good start in becoming a fashionista. purrr...meow!

*This message has been brought to you by Professor Dr Angelina Jolie*
Posted by Cat-from-Sydney at 12:30 AM 26 comments:

Guess what peeps? My Mama got me some new books, to read, not to practise my clawing skills with, over the weekend. Anyway, my niece Nikki happily agreed to be my model today. Doesn't she look scholarly? Now I'm in the mood for this scholarly pursuit.

Wordless Wednesday: Time Out in Sabah 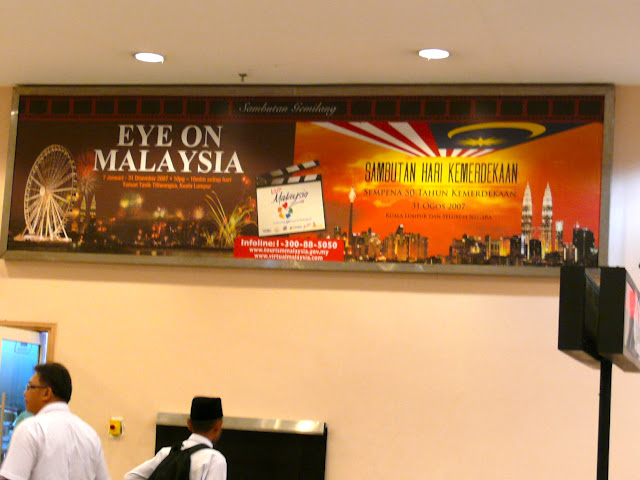 Hiya peeps! I'm going to start a new series of writing, mainly about my pawrents and the work they do. Well, my Mama tried starting a new blog dedicated to her work but...eerrmmm...seeing how bad she is at maintaining even MY blog, sustaining her own would be a disaster (as there'll be no feline nagging her there!). Anyway, we don't want to bore you with just the technical detail hence the travelogue feline style we'll be adhering to.

In this first article, we'll take you to a remote island right at the northernmost tip of Borneo. It is called Banggi, the largest among all islands in Malaysia, with a population of about 20,000 people. The people there earn their living by fishing and farming, mostly below the poverty line. Last we heard the government has started a land scheme where the locals get a few hectares of land to farm plus a house and a regular stipend.

Tourism is not a big thing yet and general infrastructure is still so-so. There's only 25km of tarred road and only one ferry service linking the island with the mainland. Last we checked, there are two services in the afternoon (1.30pm and 2.30pm) from Kudat (mainland) to Karakit (island) and another two in the morning (7.30am and 8.30am) from Karakit to Kudat. So, you'll have to really plan your stay there.

What the work was all about? Oh, several months ago Mama's office received a letter from the teachers at the island's only secondary school there, requesting help for some students who have poor eyesight but couldn't afford to buy prescription glasses. Mama's office then initiated a fundraising drive and managed to collect some funds to cover the costs of making the spectacles. Mr Lee, who is Mama's optician at Bangsar Optometry, supplied the frames and glasses at cost. (Thank you Uncle Lee....). In the meantime, the teachers took the students concerned to the hospital and get their eyes examined, took their mugshots and emailed everything to Mama (isn't the internet wonderful???)

As Mama and Dad were already going to visit Sabah for another project, the trip to Banggi was added to the itinerary. They took the 5pm flight from Tawau, reached Kota Kinabalu Airport at almost 7pm, took a taxi to KK, stopped for dinner, then another taxi to Kudat, arrived there three hours later. So they spent some time getting to know Kudat before boarding the 1.30pm ferry to Banggi.

After the formal event, there was late lunch and then some rest. The two pawpawrazzi didn't rest for too long. They had to explore the island before dark. As I said before, there isn't much tourist attractions yet but they could be interesting if you look hard enough. (OK, that's a pawpawrazzi's philosophy...)
Angelina's note: Mama says her organisations accept cash donations that will be used for similar efforts in the future. Not just for spectacles but also for other education related stuffs like books, uniforms, shoes etc. For donations, go to www.muslimaidasia.com. purrr....meow!
Posted by Cat-from-Sydney at 5:41 PM 23 comments:

Labels: Banggi, ferry, Karakit, Kudat, pawpawrazzi, Sabah, spectacles
Newer Posts Older Posts Home
Subscribe to: Posts (Atom)
“Man, when perfected, is the best of animals, but when separated from law and justice, he is the worst of all.”
Aristotle (ancient Greek philosopher, scientist and physician, 384 BC-322 BC)