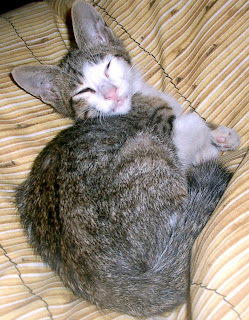 This photo was taken a few days after I adopted my Mama on 14 Jan 2004. People said I was so skinny so they called me Tom Kurus instead of Tom Cruise. 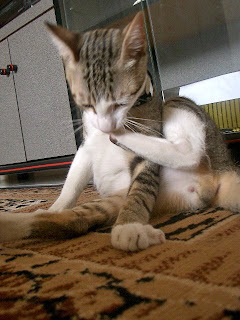 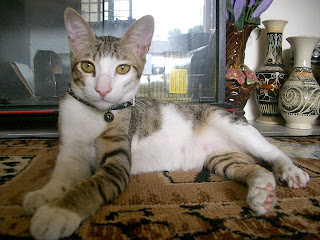 As head of the household, I'm supposed to provide for my feline family. At times I'll have to don the chef's hat and cook-up a storm in the kitchen. It's a tough life but I try to be the best, most times.

Cooking is actually very easy. First, must get a human to open the fridge door for you. If I were a Norwegian Forest Cat, perhaps I can open it myself but since I'm a non-pedigree, albeit a bit overweight, it would be impossible for me, right? OK, let's put it this way, I'm vertically-challenged (that's PC for "short").

I'm not very good at writing unlike my sister Angelina. So, I'll compose a pictorial essay instead. 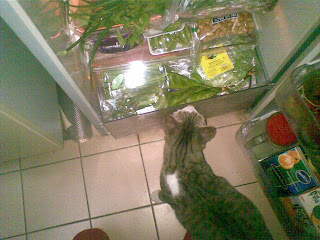 1. First, look for the right ingredients. Other beings plan their menu and then buy the ingredients. I do it in reverse. My menu will be based on what's already available. No need to mess up my handsome head. 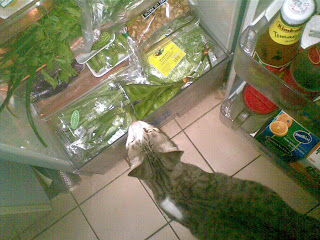 2. Hmmmm...looks like Mama has stocked up on a gazillion organic stuffs in the fridge. Now, let me see, is there any lemongrass? Oh...I simply love the smell of it....I can see stinky beans, scallion, coriander, lettuce.... 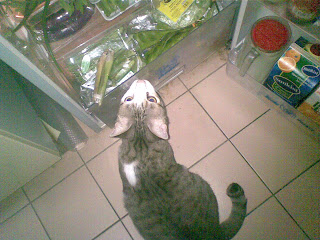 3. Keep looking, persevere...yoohoo...lemongrass, where are you? Show yourself to me. I won't harm you. 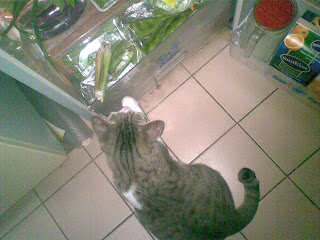 5. Be thankful....finally, the lemongrass is within my grasp. Now, kids, shall we have tuna in tomyum soup today? 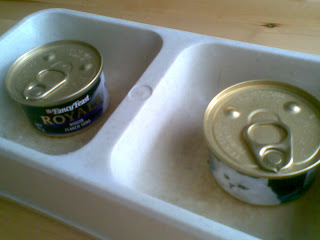 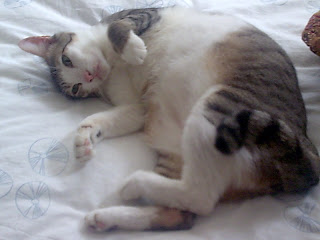 In the meantime, I'm going to take over this blog....teeheehee....Watch out for more of my jottings.
Posted by Cat-from-Sydney at 9:55 AM 12 comments:

In the UK, a kitten has survived despite being trapped in a washing machine for a full cycle.
Toby, the lucky plucky tabby, is thought to have crawled into the washing machine before it was switched on, to escape the summer heatwave. 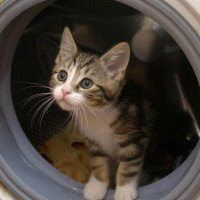 It was only after the machine had completed its 30-degree cycle that Toby's owner discovered him.
The seven-week-old kitten was rushed from his owner's home in Stonehaven, Aberdeenshire, to a local vet. Staff at the Kirkton Veterinary Centre warmed the kitten and provided him with oxygen.
Vet David McLaren said: "The kitten was unconscious and hypothermic with an exceptionally low temperature and had clearly swallowed a lot of water.
"As well as the problems caused by the cold water, we also suspected it might have suffered fractures or internal injuries as a result of being spun during the wash."
The pet has now recovered, with no long-term ill-effects, and is back home with his mother and four brothers and sisters.

Angelina's Note to Self: Make sure Brad doesn't jump into the washing machine again.
Posted by Cat-from-Sydney at 1:15 PM 13 comments:

It's been raining all weekend. Mama was upset coz she couldn't hang the washings in the backyard. Luckily we have a spare bedroom that we can put the indoor clotheslines in.

I quite enjoy Mama's laundry days as I get to help her with hanging the clothes. I also enjoy the smell of freshly laundered stuffs... hmmm....the sweet smell of detergent and softener.

Then she'll let me play with the basket and clothes pegs. My favourite moment is climbing into a basketful of dry and folded clothes. Hmmm...so clean and cuddly. A very comfy spot for dozing off....zzzzzz 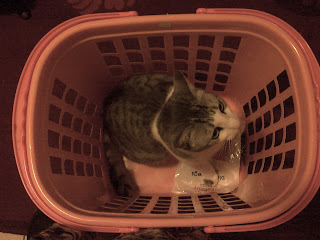 Look Brad, I have heaps of clothespegs to play with in here. 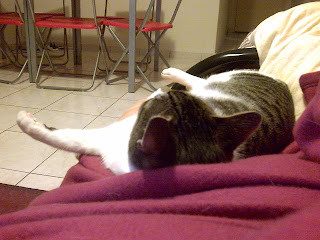 I'm trying to catch some 40 winks here. What's with all the rackets, Angelina? 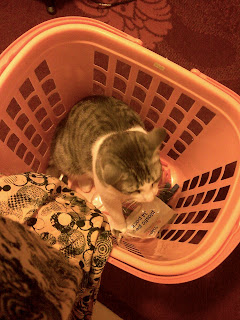 Look, I have clothespegs in a basket and even Mama's dress to play with. Come and join me, you lazy bum. 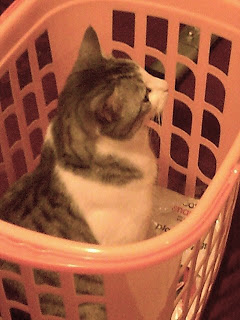 You're so slack Brad. You've been sleeping all day. Come here. You want me to come get you? 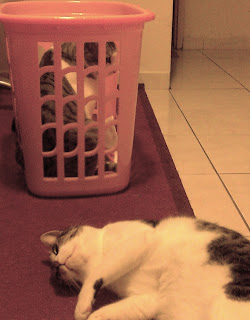 Hahaha...there's no space for you in this basket. You can stay out there. Brad's been duped... You're so mean Angelina!

It's also hard having a lazy bum for a companion. Brad is my pet so he's supposed to play with me whenever I want to. Huh! Talking to him is like talking to a wall. I'll just amuse myself then. It's hard to be a cat....sigh....
Posted by Cat-from-Sydney at 10:42 PM 8 comments:

NOTE: Click on the baby jumbo pix on the right panel for some elephant sounds....

Seems like Mama is planning another outing for us. We are going to the zoo! To see the baby elephant!!!

The whole world is now talking about this humongous baby that was born on 4th of July. Definitely a very joyful occasion that's being celebrated all over the country too. It has been a very long wait as the mother elephant was pregnant for 22 months. 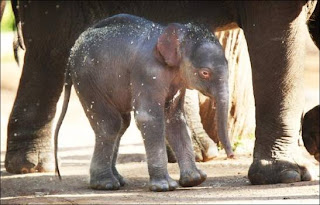 We also heard Mama speaking in Thai while asleep. "This is worse than her Christchurch dreams," I thought.

Apparently, the zoo has asked everyone to name the baby. The main prize is very tempting - tickets for 2 adults + 2 kids to Thailand plus stay at the Lampang Elephant Conservation Centre. Using my paws to count, hmmmm...that seems to be the perfect number for our family - Mama, Dad, Brad & I! yeay!

Here are some clippings from the news:

TARONGA Zoo's newest pampered star has finally made his public debut in front of adoring fans.

The yet-to-be named baby elephant, weighing in at 96kg, was born at the Sydney zoo on Saturday at 3.08am (AEST).
At lunch time today, escorted by his mum Thong Dee and adopted aunt Tang Mo, the youngster plodded a little unsteadily around a pond and waterfall near the lower viewing deck of the zoo's elephant enclosure, much to the delight of excited onlookers.
It had been a different story yesterday, when he remained tucked away inside his enclosure.
But after his first shower and bath this morning, overseen by zoo keepers inside a heated barn, the first baby jumbo born in Australia was happy to venture into the open
"There was a lot of oohing and aahing," Taronga Zoo's director Guy Cooper said.
Cooper said Tang Mo watched as Thong Dee delivered the baby calf in the early hours of Saturday morning, and has since taken on the role of doting aunt.
"We suspect Tang Mo has witnessed the birth of calves before," Cooper said.
"On the night (the calf was born) she was making noises. Her actions were like 'let me in there, I've seen this before, I can lend a hand'."
Thong Dee and Tang Mo are two of five elephants brought to Taronga Zoo from Thailand in 2006 as part of an elephant breeding program.
Thong Dee is the first elephant to give birth in Australia, while two others, Porntip and Pak Boon, are due to give birth in early 2010 and 2011.
Pak Boon and Porntip were allowed into the same enclosure as the baby elephant on Monday morning.
"That went very well," Cooper said.
"We are very comfortable that we now have one happy and steady family."
However, the baby elephant's father, Gung, is unlikely to play any role in his upbringing. He now lives in an enclosure some 150 metres from the females.
Taronga Zoo is inviting members of the public to name the baby elephant via its website.
So far about 2,300 suggestions have been received.
"What we've been asking is that names that are submitted are Thai, to reflect the cultural heritage of the animal," the zoo's spokesman Mark Williams said.
"We will be disregarding names that don't fit that category."
It will be up to the zoo's elephant keepers to select a name from the long list, under guidance from the Thai Consulate General's office.

For those of you keen to keep tab on this baby's journey, check out: http://babyelephant.taronga.org.au.

-people kill without regret
although they fly by jumbo-jet
let the word all may remember
let the children not forget.

Gentle is the elephant
Pulling loads and everything
we love to hear the children laughing
when we,re in the circus-ring
Happy was the elephant
Happy was his jungle life
and then they came, the cruel hunters
with their rifle and their knives

Listen, please listen, said the elephant
if we want the world we know, to stay alife
Then man and beast, we must work together
And together we will survive

Psst! It's the Queen's birthday!

And, she has baked a most scrumptious looking chocolate cake. When I asked her if I could have the recipe, she answered that I already have it.

"When did you give me the recipe? It's not like a secret family recipe is it?" I was persistent.

Mama just shook her head before saying, "You were not paying attention the last time I taught you to bake, did you?"

I must say she was being all Socratic about the whole business. But I've made it my mission to record every one of her recipes.

"Remember when I baked the orange butter cake?" she asked again.

"Yes, but surely a chocolate cake would be different?" my turn at being pedantic.

"Huh....," she sighed (which is not a good sign), "Just replace the orange rind and juice with molten dark cooking chocolate."

"Oh, OK, but how much chocolate and how do you melt the chocolate? Microwave?"

"You're very persistent, aren't you?"my Mama continued, "About 200g dark cooking chocolate will do and you melt it in a metal bowl over a pot of boiling water."

"And make sure no water enters the bowl or you'll spoil everything," she continued, "Now stop asking questions and just eat that slice I've cut for you."

"Angelina, what did I tell you about talking while eating? People may think I don't teach you manners." Sigh...that's my Mama telling me off. OK, ciao people. 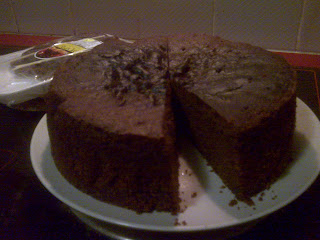 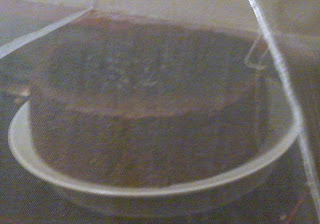 Hmmm...the cake is now under the food cover lest some hungry cats get tempted....

My advice: Never make anyone who's just bake you a chocolate cake angry. (you may not get any!)